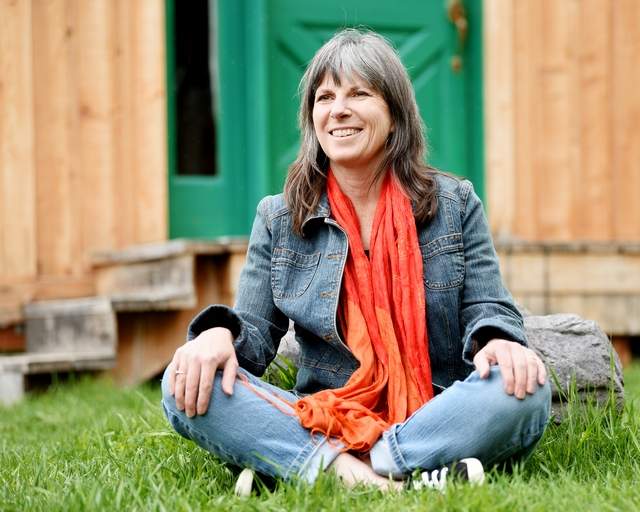 “Capital is a tool and if you have a choice of how to invest money, why not invest it in something that makes a positive difference?” she said.

McCabe, who lives in Bigfork, has brought years of experience in real estate and construction financing to two ventures designed to make a difference in the world.

Through her firm HaydenTanner, McCabe focuses on promoting environmentally sustainable practices, healthy communities, job creation and other civic-minded values to building and property development. She said being in Montana has helped inspire her to promote projects that have a positive impact.

“It’s easy to see living here how important the environment is and how important it is to be a good steward,” she said. “In the city, it is more about social stewardship. Together, you want to take care of the community, create something vibrant and healthy, and give back.”

McCabe said responsible investment can start out with simple goals – designing buildings to use less water and energy, for example. But, she said, the principles of sustainable building are also part of creating a livable communities.

“You have to add the component of people. How do you ensure when developing that you’re doing it in a way that lifts them up as opposed to displacing them? Gentrification isn’t a bad thing, unless you don’t take the people already there into account.”

A few examples of putting her philosophies into action were an energy retrofit of a 1970s-era office building in Portland, Oregon, and development of a multifamily project, also in Portland, conceived as an eco-district of buildings that share sustainable energy, water and waste infrastructure. She’s also worked on economic revitalization projects in South Africa, Colorado and Seattle.

She is passionate about seeing communities take advantage of the new Opportunity Zones created by the Tax Cut and Jobs Act of 2017 and designed to spark economic development by encouraging long-term investments in “distressed” areas through tax breaks. She would love to see Kalispell benefit from the Opportunity Zone designation granted to a portion of the city’s downtown.

“What I love about the Opportunity Zone is it’s a way to get local people involved in the community for people who have a vested interest in seeing this community develop in a way that produces jobs, is more walkable,” she said. “I think we could see more housing, restaurants, bike shops – all things are more possible.

“There’s a way for communities to think about what they want to create and incentivize. Not Seattle investments into downtown Kalispell, but a Kalispell type of investment that works for this community.”

In another finance-oriented solution to an ever-present problem, McCabe and three co-founders created the nonprofit Lotus Campaign, taking a real estate capitalist’s perspective to reducing homelessness.

The idea was born when one of her partners attended a panel on homelessness in Los Angeles.

“What came out of that advisory panel was that there were no for-profit partners addressing this problem,” she said. “We thought this was crazy. The private sector has far more capital than nonprofits or the public sector. We wondered, how can we leverage what we do?’

Among other programs, the Lotus Campaign provides financial support to landlords reluctant to rent to people who have been homeless. Their pilot project is in Charlotte, North Carolina, paying landlords a guarantee of $1,000 per unit for each Lotus client they provide with housing.

“We’ve housed over 80 people through this program,” Mccabe said. “Our innovation is that we are leveraging capital; it’s the simplest way to get people into houses.”

The Lotus Campaign also partners with social service agencies to help the homeless find and remain in housing, and aims to increase the number of low-cost housing units through investment in apartment renovation projects.

She started her career at Wells Fargo as a construction lender, then entered a management training program. She moved on to a Bank of America position that took her to Toronto, Ontario, for a year and a half. She came back to the U.S. and before age 35, she was in charge of a Bank of America real estate capital group, with staff in San Francisco, Chicago and Los Angeles.

Her life changed when a family member was in a vehicle accident in Idaho. She flew from San Francisco and was met by Todd Tanner, a fly-fishing guide and friend of her brother’s. Tanner eventually became her husband.

Tanner tried living in San Francisco, but McCabe said he hated it, so they moved to Bozeman together.

“I called my boss in L.A. and told him I’d like to telecommute,” McCabe said. “He said he’d let me try for a year and if it doesn’t work out I’d have to come back or quit.”

McCabe sold her condominium overlooking the Golden Gate Bridge and even before she’d moved, her original boss was fired. The new person in charge did not approve of her plan to work remotely.

“I moved anyway,” McCabe said. “I just said I’d have to re-create myself.”

She began consulting and recruited someone she knew from Bank of America as a partner. They started Bridger Commercial Funding, raising venture capital money for their startup that worked largely in commercial mortgage-backed securities. The firm eventually dissolved.

She moved with her husband to an off-the-grid house in Yaak, from where McCabe still worked as a consultant on real estate transactions and as a mediator and professional business coach. She had her son, who is now 14, while they lived there. McCabe did not want to raise a child in a remote location and the family settled in Bigfork in 2005.

McCabe travels often for work throughout the country, though her work most often takes her to Seattle, Portland and San Francisco. When she’s not on the road, she loves to ski, hike, garden and ride her bike — “all the obvious outdoor things we do here.”

Reporter Heidi Gaiser may be reached at 758-4438 or hgaiser@dailyinterlake.com.