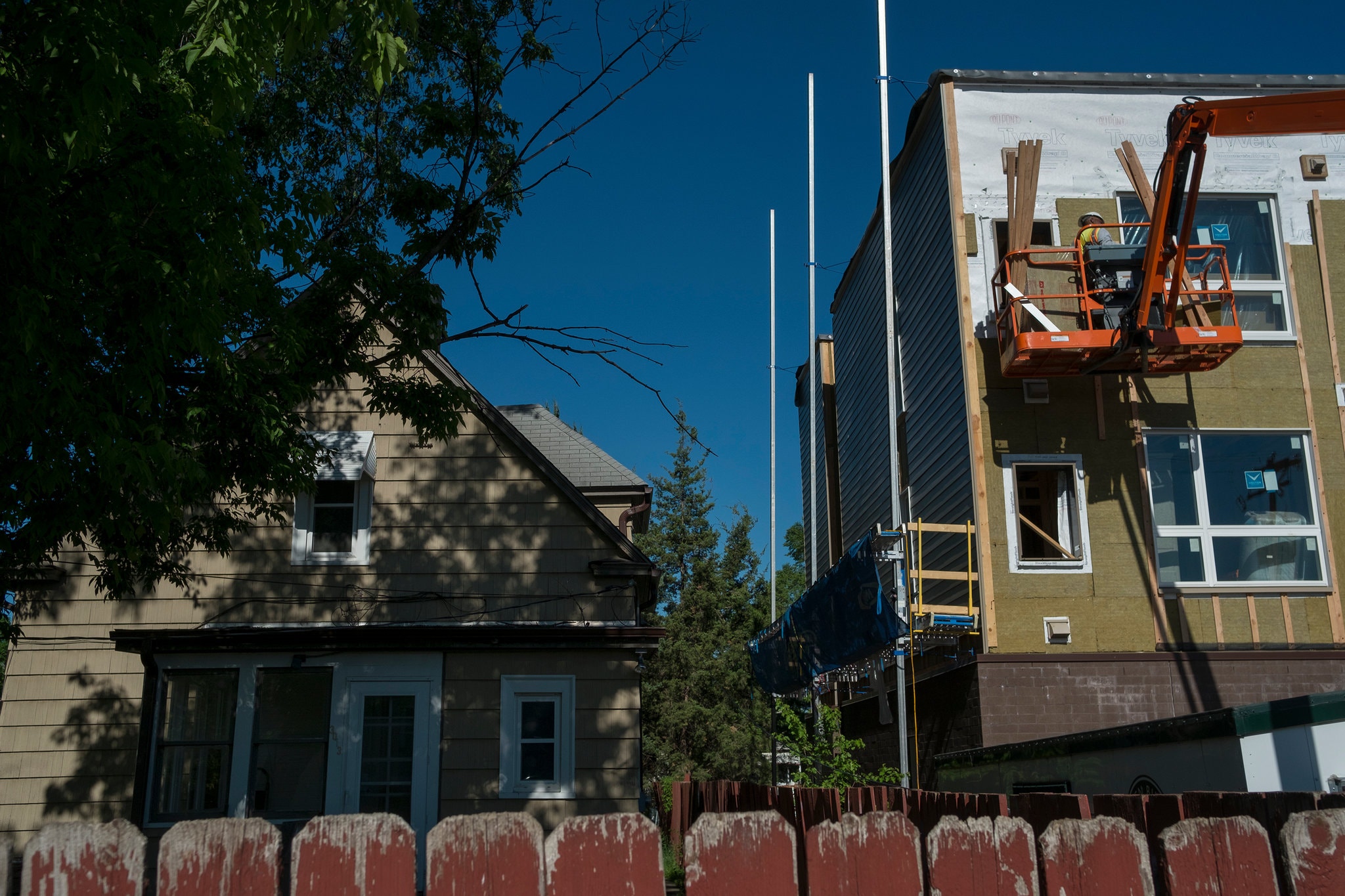 Housing is one area of American life where government really is the problem. The United States is suffering from an acute shortage of affordable places to live, particularly in the urban areas where economic opportunity increasingly is concentrated. And perhaps the most important reason is that local governments are preventing construction.

Don’t be misled by the construction cranes that punctuate city skylines. The number of housing units completed in the United States last year, adjusted for the size of the population, was lower than in any year between 1968 and 2008. And the problem is most acute in major urban areas along the east and west coasts. Housing prices, and homelessness, are rising across the country because there is not enough housing.

Increasing the supply of urban housing would help to address a number of the problems plaguing the United States. Construction could increase economic growth and create blue-collar jobs. Allowing more people to live in cities could mitigate inequality and reduce carbon emissions. Yet in most places, housing construction remains wildly unpopular. People who think of themselves as progressives, environmentalists and egalitarians fight fiercely against urban development, complaining about traffic and shadows and the sanctity of lawns.

That’s why a recent breakthrough in Minneapolis is so important. The city’s political leaders have constructed a broad consensus in favor of more housing. And the centerpiece is both simple and brilliant: Minneapolis is ending single-family zoning.

Local governments regulate land use by chopping cities into zones, specifying what can be built in each area. This serves some valuable purposes, like separating homes from heavy industry. But mostly, it serves to protect homeowners. In many cities, including Minneapolis, more than half of the city’s land is reserved for single-family homes.

People should be free to live in a prairie-style house on a quarter-acre lot in the middle of Minneapolis, so long as they can afford the land and taxes. But zoning subsidizes that extravagance by prohibiting better, more concentrated use of the land. It allows people to own homes they could not afford if the same land could be used for an apartment building. It is a huge entitlement program for the benefit of the most entitled residents.

The loose fabric of single-family neighborhoods drives up the cost of housing by limiting the supply of available units. It contributes to climate change, by necessitating sprawl and long commutes. It constrains the economic potential of cities by limiting growth.

In December, the Minneapolis City Council voted 12 to 1 to allow construction of at least three residential units per lot throughout the city as part of a larger package of changes intended to increase housing construction. Under the plan, most construction still will be concentrated in the center of the city and along transit corridors. But the elimination of single-family zoning was crucial in building political support for the plan, ending a system under which more than 60 percent of Minneapolis was sheltered from change.

“Cities are in constant evolution, and we’ve limited that evolution by mandating that two-thirds of the city is exclusively single-family,” said Jacob Frey, the mayor, who made affordable housing the key issue in his 2017 election campaign. Mr. Frey, who is 37, said residents — particularly younger residents — want to live in a different kind of city than did their parents: dense, diverse, vibrant. “And in order to achieve affordability and a diversity of housing options,” he said, “you first have to allow for it.”

The affordable housing crisis cannot be solved by new construction alone, at least not in the short term. Governments need to provide subsidized housing for people who cannot afford market-rate housing. But advocates for affordable housing should be jumping up and down and screaming for the construction of more high-endapartment buildings to ease demand for existing homes. Those new buildings are filled with people who would otherwise be spending Saturdays touring fixer-uppers in neighborhoods newly named something like SoFa, with rapidly dwindling populations of longtime residents.

Market-rate construction also can help to reduce the need for public housing subsidies in the longer term. Today’s market-rate apartments will gradually become more affordable, just as new cars become used cars. The price of the average rental unit declines by 2.5 percent a year, adjusting for inflation, according to a 2014 study.

Other regions are considering the Minneapolis approach, but proponents have run into stiff political opposition. In California, legislators from wealthy, low-density cities blocked a plan to increase construction that would have allowed “fourplexes,” or four-unit apartments, throughout the state. In Seattle, ambitious proposals were reduced to a bill that allows more development on about 6 percent of the city’s residential land.

What went right in Minneapolis? The story begins with a crop of young politicians who want more housing: The city is conducting an early experiment in government by and for millennials. For the first time in the city’s modern history, more than half of its residents are renters, including Mayor Frey. Many residents — again, younger people in particular — also describe density as a necessary response to climate change. Environmentalism, which began as an effort to protect people from cities, is increasingly embracing cities as the best way to protect the planet from people.

Linnea Goderstad, a 32-year-old event planner who lives in a townhome just outside downtown Minneapolis, waited in a long line last year to testify in favor of the plan.

“It was so stark,” she said of the generational divide among those who came to speak. “It was just so easy to guess, just judging by age, what side they were going to be on.”

Race also played a central role. Minneapolis is among the most segregated and unequal cities in America, a fact at odds with its self-image as a tolerant and diverse community. The gap between white and black homeownership is the widest in any of the 100 cities with the largest black populations: 75 percent of whites own their homes, compared with just 25 percent of blacks.

The 2015 shooting of Jamar Clark, a black man killed by Minneapolis police officers, focused the anger of the city’s black residents — and it persuaded some of their neighbors to listen more carefully. In the ensuing debates, many residents said they were surprised to learn that single-family zoning in Minneapolis, as in other cities, had deep roots in efforts to enforce racial segregation. Cities found that banning apartment construction in white neighborhoods was an effective proxy for racial discrimination, and the practice spread after it was validated by the Supreme Court in 1926.

In Minneapolis, the current political leaders argued that ending single-family zoning was a necessary step to rectify that history of racial discrimination. On many city lawns, signs that read “Neighbors for More Neighbors” stood alongside signs that read “Black Lives Matter.”

All of this deserves wide emulation by other American cities. But Minneapolis has an important advantage: Its housing prices still are relatively modest, so its population includes a lot of middle-class families. Housing debates in coastal cities pit the wealthy against the poor, and middle ground has been hard to find.

Lisa Bender, the president of the Minneapolis City Council, lived in New York and San Francisco before returning to her hometown, and she is convinced that Minneapolis has a narrow window to address its problems while a political consensus still is possible.

“The hope is that all of these things together will at least slow things down enough to not reach that tipping point,” she said, referring to the problems on the coasts. If the city does not build, and prices keep rising, “everything becomes more challenging.”